Boy it's a good thing they got Christopher Monfront in custody, he might avenge that crap, and we can't have our tin badge gods challenged, right? 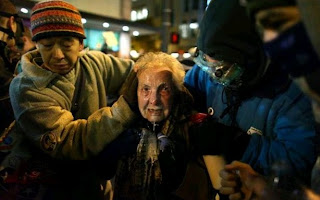 Joshua Trujillo / Seattle Post-Intelligencer
Dashiell Bennett 252,638 Views 5:17 AM ET
Seattle photographer Joshua Trujillo captured what may become the defining image of this week of Occupy unrest — an elderly woman being led away from the mayhem, her face covered with pepper spray. A pregnant woman and a priest were also hit with pepper spray during a march on Tuesday night. You see more photos of the confrontation at SeattlePI.com. (More photos here as well.)
The Seattle branch of the Occupy movement, which has been camped out near Seattle Central Community College, held the march in support of the New York camp, which faced a day long eviction battle with the city yesterday. On Monday, Occupy Oakland was the scene of another attempt by police to drive campers out of a city park. There were reports that both Occupy San Francisco and Occupy Cal (on the Berkeley campus of the University of California) are being raided on Wednesday morning. The week of police crackdown comes amid reports that the federal government and is coordinating with multiple on legal strategies that can shut down the Occupy protests.
The woman in the picture is not just any elderly woman, however, as she is well known to Seattle residents. Dorli Rainey is a former school teacher who has been active in local politics since the 1960s. In 2009, she ran for mayor, but eventually dropped out by saying, "I am old and should learn to be old, stay home, watch TV and sit still." We guess she didn't learn.

HOW TO START A MILITIA TRACT

HOW TO START A MILITIA TRACT by leechster

BUY A GUN FOR YOUR GRANDKID

THE FUTURE OF WARFARE SERIES

The Future of Warfare

Get your gear and how-to info here:

Links you ought to visit

REAL OATH KEEPERS DON'T DO THIS

HOW TO SHOOT A RIFLE TRACT

How to Shoot a Rifle How to Shoot a Rifle Quick tract on how to shoot a rifle, laid out to be published as a credit card size tract you can print out and plant anywhere and everywhere. INSTRUCTIONS: Print onto two, two sided pages if you can't have that option with your printer, you will have to feed and switch sides yourself. Cut horizontally along the dividing lines, top and bottom of the panels and along the outside edge. BE CERTAIN NOT TO LOSE TRACK OF YOUR SECTIONS OR HOW THEY'RE ORIENTED!!!! You need to cut so that pages one and three are facing up. When you have your horizontal sections-you should have eight-you then start stacking them, top section, first page over next section down first page, then those two sections placed over the third section down, then the three stacked sections over the bottom section, first page. Then, your stacked sections go atop the top section, second page, then that stack goes over the next section down of the second page, then the stack goes over the third section down of the second page, and then finally the stack goes atop the bottom section, second page. AGAIN, DO THIS WITH PAGES ONE AND THREE FACING UP ON A DOUBLE-SIDE PRINT JOB, YOU SHOULD HAVE TWO, REPEAT, TWO DOUBLE SIDED SHEETS OF PAPER. Staple together. Pass them out everywhere, the enemy has spent generations vilifiying gun ownership and making rifle marksmanship about a lost art to the average American weaned on hip shooting Hollywood action stars as the actors depicting them cower in fear and so have this BS hapless victim mentality reinforced. Hapless victims are easier to shoot at and herd into camps than Americans who know how to shoot. This is a beginner's tract, but it has the basics. Pass these around and help save Our America.

I'm placing these 2o rules someone posted for their group, and I want you to guess which one:

1. They are voracious in their infoseeking. If it takes all night long, or weeks, or years, they will look and look till they get what they have been looking for.

2. Whenever one of their associates or slaves needs something for a mission, Illuminati members make sure this person or persons get the material resources they need to get the job done, whether it be by contributions or whatever. Even if the person is disliked, all that is necessary is that the person has the skills for the job and the plan be workable. No whining on forums, no silly speeches, just gets done.

3. They know how to conserve their resources. They do not throw out all their chips all in on one go.

4. They trust their instincts.

5. If they see an opening, they do not hesitate to take advantage and exploit it.

6. They do not go into deep dark depressions just because they had one minor setback. They use everything they have to find out exactly what went wrong, and correct the problem.

7. They know how to organize themselves.

8. Among them, concepts of color, sexual orientation, and fame are meaningless. The goal goes first.

9. They know what TV is and does - they introduced it, you know! The goal comes before the TV or any of their other mind control devices, such as video games. Watching all those hours every day and being "awake" are like matter and anti-matter. They cannot be in the same place at the same time.

10. They know to not let anyone take what they have. If someone tried to CPS their kids there'd be hell on all involved in trying, even the person who made the call. Literally.

11. You can insult them all you want, call them anything, and they do not take it like Joe and Jane Public would. This is because they have absolutely no pride or morals, but anyone who does with intelligence can easily integrate this into their minds.

12. They would NEVER, under any circumstances, sell out themselves out by giving their family secrets out to the public for peanuts, like so many of the commoners do by selling out their countries and spying on and black opping their fellow humans.

13. In the public eye, wanting a lot of material resources is seen as something to be ashamed of. It is a damn good thing! Everyone should have all the material items they need to do everything they need to do, and should feel pride in having the self-love for holding that perspective and moving with it. This is the mindset the leadership of the Illuminati hold.

14. When information is placed before them that is obviously a threat to their well-being, they immediately take action about it and do not go rushing to drown life circumstances in a TV or bag of takeout, even if they do not know precisely what to do at the moment.

15. Even if all hope seems lost, and the odds are against them, they still keep on working at it 110%.

16. They know the value of building up networks.

17. They feel no guilt about defending themselves from legal, physical, or other attacks. At times I read about people I see acting nice to their agents, saying sorry to them, when it was the agent who had infringed upon their rights. Never be sorry and apologetic to them. It's a clear cut sign of victim mentality and is asking for trouble.

18. They are flexible, to an extent, and do not work with the controlled by them mainstream science and know the reality and value of homeopathy, energy and herbal healing, and do not hesitate to take full advantage of these using all the resources they have at their disposal.

19. They have always understood that they have their livelihood to defend, which is their pyramidal control system and all the luxury that comes with it. Humanity will learn from this, whether it be gently through information like this article, or the hard way. Everyone must understand that their livelihoods are also being threatened, and act upon this via exposure of the agenda.

20. They know to set aside their petty differences when business needs to be taken care of.

Nobody in the movement. Someone claiming to have affilliation with the "illuminati" but whether or not doesn't matter, anyone can see the enemy presents a united front against us.

Who lives by this?

Not too many in the movement, in fact most of the time it seems like nobody.

Could we live by this?

We could. It's a matter of doing.